I have spent my share of time at hospitals, from waiting rooms to recovery wards and everything in between.

I know a thing or two about cancer, too. Following a recent operation I found myself recovering for 12 days in an oncology ward where some of my fellow patients never went home at all.

Watching Waiting Room, Tarragon Theatre’s newest drama, brought memories of the experience bubbling to the surface. I presume it would be similar for anyone who has spent a significant amount of time in a hospital. Someone without that experience would leave the show with a solid idea of what a hospital stay is like, but I’m not sure I get what learning that lesson accomplishes.

The drama roughly follows two plotlines: one involving the anxious parents of a baby girl in a cancer unit and the other involving the doctors providing her care.

Parents Chrissie (Michelle Monteith) and Jeremy (Jordan Pettle) anxiously await the results of their daughter’s multiple-week stint in the pediatric ward while doctors try to remove her brain tumour.

Relying on the Internet to fill in the blanks between whatever professionals are telling him, Jeremy demands that his daughter’s surgeon, Andre (Ari Cohen), attempt an experimental — and potentially deadly — treatment after chemotherapy has failed.

While Andre resists, the audience soon learns that behind the scenes he is dealing with early-onset dementia, and demanding that his own colleague/lover, Melissa (Jenny Young), give him an experimental — and also potentially deadly — treatment.

Their supervisor, Dr. Aayan (Warona Setshwaelo), and Brenda (Jane Spidell), a friend of Chrissie’s whose son survived what the couple’s daughter is now going through, round out the cast.

Waiting Room is written with care and empathy, and reading the playwright’s notes in the program I learn it’s because of Flacks’s own “nine-month sojourn” with her newborn son in the neo-natal intensive care unit at the Hospital For Sick Children.

While not an autobiographical story, the conflicts brought out in the play ring true, as do its characters.

Andre is an abrasive (and often funny) co-protagonist, but — and this is crucial — it’s as easy to understand where he’s coming from as it is to empathize with Chrissie, who spends most of the show on the type of emotional rollercoaster that shoots riders up and down for two hours without letting them pause for breath.

The staging highlights the emotionally draining tone, with actors positioned as if the audience doesn’t exist at all (expect to see a lot of backs). The set incorporates the stage’s exit, and a “hallway” cuts through the audience, as if the characters are trying to ignore anyone who has the audacity to be in the waiting room during some of the most important moments of their lives.

Waiting Room is engaging, well written, solidly directed (by Richard Greenblatt) and superbly acted. At least 80 percent of the audience gave it a loud standing ovation. However, I am left wondering just who this show is for.

Both I and the friend who joined me have strong hospital memories. I learned later that many in the audience with us were from Sick Kids. And as mentioned above, someone without our experience would leave with a solid idea of what a hospital stay is like. But to what end?

In other words, despite its quality I can’t say I liked the play. The plot achieved closure, but I didn’t feel closure at the end. Or, as my friend put it, it yanked our heartstrings and left us hanging.

Then again, considering how often real life leaves one feeling that way, maybe that was the point. 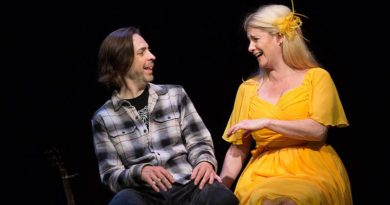