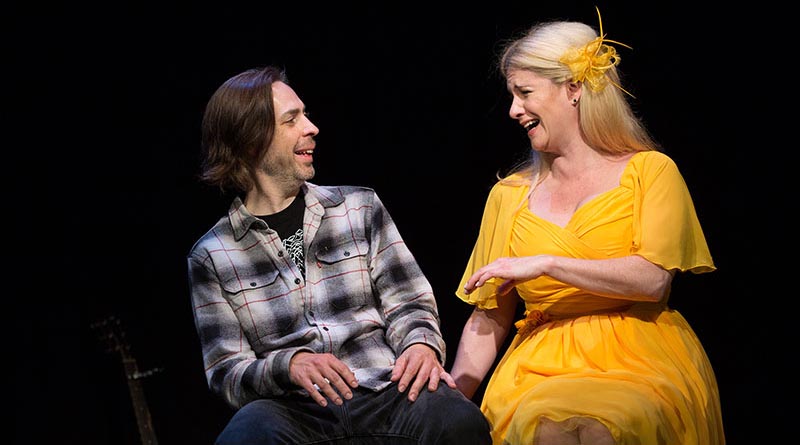 Midsummer (a play with songs), by David Greig (book) & Gordon McIntyre (music and lyrics), directed by Tamara Bernier Evans, running at Tarragon Theatre’s Mainspace to May 28.

Don’t be fooled by the title — Midsummer (a play with songs), has little in common with the Bard’s tale of mistaken identity, except for a character named Helena and a couple of scenes set during a fetish party with the groan-inducing title of “A Midsummer Night’s Cream.”

Midsummer closely resembles the plays I’m used to seeing every year at the Toronto Fringe Festival, where three actors count as a large ensemble. Using only two actors (Carly Street and the guitar-playing Brandon McGibbon) and four trunks filled with enough costumes for two or three good Saturday Night Live sketches, Midsummer builds a romantic comedy as effective as anything Hollywood has churned out recently.

That scrappiness is both a strength and a weakness, however. Edinburgh natives Helena, a lonely lawyer, and small-time criminal Bob regale us with the tale of how their singularly memorable weekend began. She had been stood up by her married boyfriend, he was reading Dostoyevsky, she approached him with a bottle of wine and a proposition they both remember very differently. The show lives or dies based on its performers’ charm — and, consequently, their ability to lead you through the story they’re telling.

Sometimes, as with our lovers’ wonderfully awkward (and surprisingly explicit, without resorting to nudity) first night together, everything clicks and the result is magic. Same as when members of the audience are given cue cards to read out Bob’s self-deprecating thoughts on turning 35 and having no idea what he’s doing with his life,

At other times, such as during the aforementioned fetish party, it falls flat — and not for the reason you’d think. Over the course of the evening the party is revisited twice, out of sequence, and without a changing set, elaborate lighting cues, or other actors to play the characters who aren’t Bob and Helena, it becomes incumbent on the audience to keep the often-winding story straight in their heads.

To cite a more concrete example, after their first night together Helena and Bob begin the morning after on very different paths, and after witnessing Bob agree to deliver a stolen car — a job involving a not-inconsequential sum of money — and Helena realizing she’s late for her sister’s wedding, and with Street and McGibbon playing such characters as Bob’s enforcer and Helena’s bratty nephew along the way, I began mixing up who interrupted what, and when.

Heck, during the last 30 minutes I thought I was watching a flash-forward that occurred several months after the first hour, then learned after arriving home that I was simply watching Bob and Helena’s Sunday.

Again, the show isn’t without its charms: McGibbon and Street have excellent chemistry. Their Scottish accents were consistent enough (except when singing) to fool me into thinking they were natives at first. The songs ably punctuate the action, while being just rare enough to keep the show from tipping into musical territory. And, since Edinburgh’s just about my favourite city in the world, hearing Street and McGibbon discuss their path through the city while mentioning landmarks such as the Canongate and Arthur’s Seat put a smile on my face.

I’m guessing the audience that joined me for Midsummer liked it too. It received a standing ovation from at least 80 percent.

But I also need to admit that since I couldn’t tell the show (which it turns out began life seven or eight years ago at the Edinburgh Fringe Festival) was meant to depict a single weekend, I probably wasn’t as moved by the ending as playwright David Greig wanted me to be.

And that’s a shame, because unlike his counterparts in what has been a disappointing season at the Tarragon, Greig has actually written characters who engaged me. 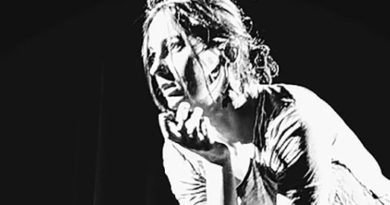 October 5, 2009 Town Crier staff Comments Off on A movable lovefest 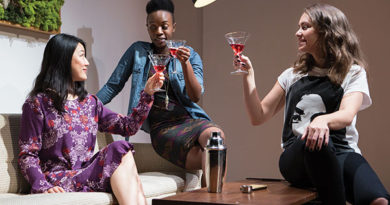