There are lots of reasons to love brunch.

Consumed at one’s leisure, somewhere between 11 a.m. and 2 p.m., it allows for a certain degree of relaxation and one can enjoy without feeling in the least decadent. And the menu straddles two meals — breakfast and lunch — often with creative latitude.

So we find ourselves regarding the menu at Lil’ Baci with some enthusiasm. The mandatory eggs are here, but there’s more than one way to crack the boredom of poached, fried or scrambled. So my two guests and I decide to tackle three different approaches.

My first guest goes for the unusual: eggs baked with panna (cream), cremini mushrooms, spinach and Asiago cheese ($13). The little gratin baker is piping hot when it arrives (indeed, the waitress has warned that we must allow 15 minutes for baked egg dishes as they are freshly made). Beside it, homefries crisped in duck fat add a lovely self-indulgent touch, redeemed by a small salad of greens and radicchio dressed in a light vinaigrette.

The eggs are whole, baked to firmness in the blend of mushrooms, spinach, cheese and cream, absorbing the flavours.

This from one who wields the salt cellar with the same gusto as a kid adding ketchup to fries. A light sprinkling of freshly ground pepper is all it needs.

My second guest chooses tradition. Eggs Benedetto takes the breakfast classic to another level, with crispy pancetta rather than the usual ham and a lemon truffle Hollandaise ($13). It comes on wedges of pita style bread — apparently made in-house — and the same homefries and salad.

The eggs have been poached to perfection, with just the right runniness of yolks to ensure the last of the bread isn’t superfluous. My guest raves about the crisp pancetta.

“It’s like a cross between bacon and ham,” he says. “A nice contrast of texture and flavour.”

He also approves of the salad: “Not so much vinegar that you can’t taste the greens for the acid.”

The lightly dressed salad is important in my choice. I don’t want to overwhelm my scrambled eggs, because these have also been taken to the next level with white truffle oil and Asiago cheese ($12). Served on a wedge of house made bread which has a light schmear of truffled mushroom tapenade, it’s gloriously fungal. The earthiness is evident in every bite and it makes a perfect foil for the crisp duck-fat homefries.

It’s evident that chef Larry Santos is determined to make brunch a little more than bacon and eggs on two slices of wholegrain. Each dish got an unreserved full thumbs up. Even the coffee — freshly made and strong, the cream offered in a little jug instead of the wasteful little plastic packets — won kudos.

The menu says Santos uses locally sourced and seasonal produce whenever possible, but there’s a commitment to Italian cheeses: Asiago, Tallegio, Scamorza. Since the owner is of Italian descent — witnessed in old family photos on the walls — perhaps that’s forgiveable.

This spot has it all. The food is inventive and reasonably priced and the staff is helpful and attentive. It’s well named, too. Baci is Italian for “kisses”. Mangia! 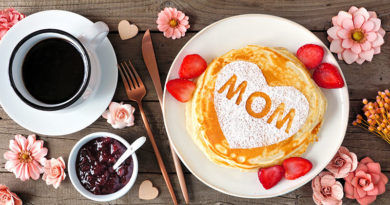 Celebrate Mother’s Day with a brunch takeout or delivery

May 7, 2020 Monique Thompson Comments Off on Celebrate Mother’s Day with a brunch takeout or delivery