Some 30 years ago, on a flight from Lima, Peru to Toronto, I sat next to a UN food specialist who told me confidently that quinoa would save the world from starvation.

While its acceptance has been slow, quinoa (pronounced keenwah) has been recognized as a Superfood, and the UN Food and Agriculture Organization declared last year The Year of Quinoa.

A member of the goosefoot family (think spinach and beets), this hardy crop can grow almost anywhere, and unlike grains like rice or wheat doesn’t require massive irrigation.

For centuries South Americans cherished this seed. The Incas called it “mother seed”. The early missionaries tried to wipe it out because they didn’t like the reverence with which it was treated. But it continued to be cultivated in the Andes and has now become an important cash crop for collectives in Bolivia, Peru and Chile.

Quinoa has a nearly perfect balance of protein, carbohydrates and dietary fibre, as well as being a good source of B-vitamins and important minerals such as potassium. It’s one of the few plants to contain all nine amino acids for complete protein. And to cap it off, it has a low glycemic index and is gluten free.

Recent research has found quinoa contains phytoestrogens, which are said to prevent or reduce osteoporosis, arteriosclerosis and other conditions in women caused by lack of estrogen after menopause.

Quinoa is remarkably versatile. It comes in several colours, from black and red to white or golden, making it a colourful addition to the plate. It can be added to soups, form the basis of salads, replace rice as the base for curries, and even be incorporated into desserts.

Available in supermarkets and health food stores, it’s a low-cost addition to your menu.

Always rinse thoroughly under running water first, to remove the bitter saponin which might still be on the surface, though most quinoa sold today has been pre-rinsed. For three cups of cooked quinoa, combine one cup of quinoa with two cups of water in a saucepan. Bring to a boil, reduce heat to low and simmer 12–15 minutes until liquid is just absorbed. Remove from heat and allow to stand covered for 2–3 minutes for al dente, or 5–6 minutes for a fluffy texture.

Mango Coconut Quinoa Salad
This makes a healthy, meat-free meal that packs a variety of flavours and textures into every bite.

Directions:
In a large bowl, combine the quinoa, mangos and red pepper.

In a small bowl, whisk together cayenne, lime juice, oil and honey. Add to quinoa mixture and gently toss to coat. Season to taste with salt and black pepper. Cover and refrigerate for at least one hour or for up to four hours.

Barbecuing adds the flavours of summer

June 10, 2010 Town Crier staff Comments Off on Barbecuing adds the flavours of summer 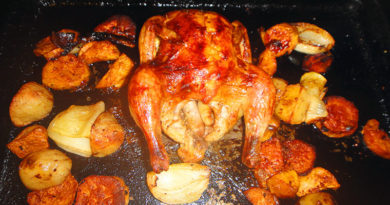