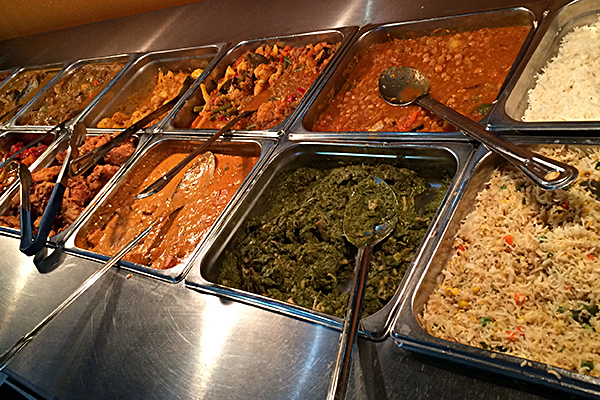 I generally avoid buffets. Let’s face it, there are few cuisines that show to advantage after an hour on a hot table. The one possible exception is Indian fare. Curries can improve with time, as the flavours and spices blend together, though my preference would always be for a freshly prepared one.

I tackled, with a guest, a popular midtown Indian eatery.

A big advantage of a buffet is one can tuck right in. We arrive hungry at Banjara on Eglinton Avenue East. On offer is a small buffet with a dozen or so hot items, a few salad fixings and some desserts ($10.99 weekdays, $11.99 weekends).

The emphasis here is on the food of Kerala in South India, the waitress tells me. Nonetheless, there are a couple of dishes unfamiliar to my guest, who knows Indian cuisine. There are chicken wings that look like they came out of a KFC box, though they have a completely different set of “11 different herbs and spices”. And the fried rice might have come from the Chinese takeout down the street, though my guest suggests this really is a pilaf, the Indian version of this dish.

Another oddball is a slightly sweet chili fish, which proves a huge hit with us. Neither of us has encountered this in an Indian restaurant before. The flavour is reminiscent of Thai dishes but the waitress assures me it is distinctive to Kerala. With the bite of chillies alongside the sweetness, it is one of our favourite selections on the buffet.

Another hit is saag, made with mushrooms rather than the usual paneer cheese.

Saag is spinach, and the resulting dish looks a bit like baby food with mushrooms in it. Don’t let that deter you. It’s actually delicious and a milder complement to the zest of the curries.

The only appetizer is a rather doughy vegetable filled samosas. Some pakoras — those lovely bits of vegetable and onion fried in chick pea flour — would have been nice.

The more usual suspects are all here too: tandoori chicken, vegetable curry, goat vindaloo (not nearly as fiery as one might expect of a vindaloo) and butter chicken, a creamy curry made with chicken cooked first in the tandoori oven. This one is smooth and like the vindaloo very lightly spiced.

My guest waxes forth on the tendency of Indian chefs to pander to Canadian tastes by dumbing down the spices and strong flavours of their native food.

The dish that suffers most on this buffet, she asserts, is aloo gobi, a classic Indian vegetarian dish.

Usually a dry curry of cauliflower and potatoes, it should be zesty with ginger, coriander leaves and garam masala (an Indian curry spice), she explains. This one is runny, and almost bland.

On the other hand, lamb masala has plenty of zing, as does channa masala — a chick pea dish. The naan breads and pappadoms (paper-thin crispy flat breads) are both excellent. And while there’s no mango chutney on the buffet, we were able to request some.

The desserts are not hits at all. The rice pudding is not the lovely cardamom-scented sweet I expected. Rather, it tastes artificial, as if it has been made with custard powder. The gulab jamun — a dumpling in sweet syrup — is also rejected by both of us. But in the little dessert freezer I find some lovely rose water-scented ice cream and pistachio kulfi, both Indian desserts, and both delicious.

Banjara is a handy spot for an inexpensive lunch. The staff are friendly and helpful and you certainly won’t leave hungry. The restaurant is small and started life as another ethnic spot. There are some amazing tile murals. Though we found the dishes a little hit and miss, there are enough choices that you’ll find really tasty options. A must try is the chili fish. Banjara, 164 Eglinton Ave. East, 416-486-6644. http://eglinton.torontobanjara.com. Note that prices posted online are not up to date.