Cedarvale psychotherapist Natalie Gold is sharing her own history with eating disorders to reach out to sufferers of binge eating and their families.

In February, during Eating Disorder Awareness Week, the 70-year-old is sitting in a small wicker chair in her office. Two couches run parallel to each other and the room doubles as a small library to fiction and health books.

She switched careers nine years ago from being a market research analyst to a psychotherapist, but before that shift she wrote down her own battle in the late 1960s with an eating disorder, one that had her in the Clark Institute of Psychiatry (now CAMH).

“I still had memories of my in-patient experience there,” she admits. “It was within the first year it opened which I didn’t know of until I started writing my book.”

Binge Crazy, published by Arrow Publishing in October, was her attempt to shed years of stress and family tension in 2000.

“I started dumping the memories, stream-of-conscious style, on to the computer,” she says. “I did that for a couple of months, and that was that.

“They didn’t haunt me to the same extent, which is a therapeutic tool that a lot of therapists use.”

That catharsis of her “hairball from the past” is what many therapists use to help clients purge what ails them. Once Gold combined her thoughts with her own medical records a story began to take shape.

Taught at the Gestalt Institute, she absorbed a holistic approach to treating patients who suffer from binge eating and bulimia.

She treats those who see food as an “escape hatch.”

For them, taste is lost with each bite, and only the first and last morsels have flavour. But it’s not the eating that’s the problem, Gold urges. It’s the pre-existing conditions, or traumas one suffers from.

“If you don’t deal with the underlying issues, that’s when (the illness) can really take off,” she says. “We’re focused on the physical problem. Weight is the symptom.

“With bulimia, people binge, restrict and then get rid of it. They’ll purge with exercise, or laxatives or even more restrictive,” Gold adds, pointing to her head. “It’s all a pre-occupation, and the issues are under here.” 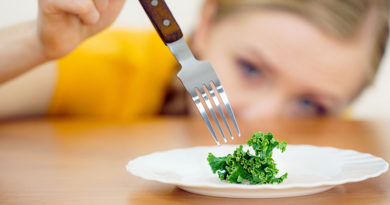 How to recognize your child’s eating disorder