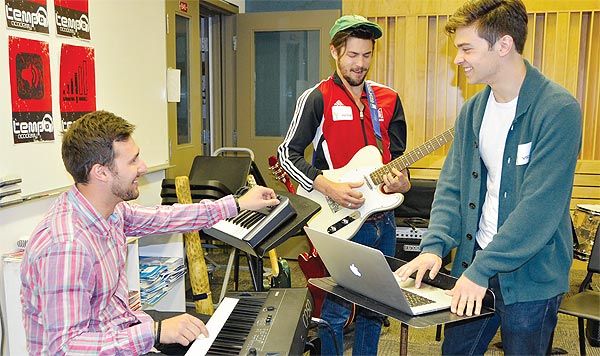 A trio of local entrepreneurs saw an opportunity to start a summer camp after realizing there was no place where youth could learn electronic music production.

“How it came to be, we all produced music and at some point or other we all had to learn how to do it,” said James Campbell, one of the co-founders of Tempo Academy, from a music room at The York School where the camp will be held from June 23 to Aug. 15. “You can’t just go down the street to take classes like guitar or piano for music production… so we figured we’d start it ourselves.”

Rather than teaching how to play an instrument or how to be a live DJ, the sessions will be geared toward teaching youth music production skills. In addition to teaching day campers the ins and outs of production software used by the likes of Daft Punk, DeadMaus, M83, Mogwai, Nine Inch Nails and Pete Townshend, Tempo Academy will feature lectures, guest speakers and exercises where the students can record samples and create their own music.

“This bridges the gap between getting conventional music lessons and being able to produce music on an electronic level,” said co-founder Peter Argyropoulos.

Argyropoulos is a classically trained musician, DJ, audio engineer and technician at Sirius XM satellite radio. Campbell is a McGill University student who has experience running summer camps and producing electronic music. Joining them on the venture is Dmitri Kralik, a Richard Ivey School of Business student who also has a background in piano and music theory from the Royal Conservatory of Music.

“We’re giving kids the tools that they need to take their musical skill and turn it into musical production,” Campbell said. “Every different part of a song, we’re going to teach them how to make it on a computer.”

“Even though we’re all doing different things, we’re all so passionate about electronic music,” added Kralik.

The camp will run in two-week sessions at the Yonge Street and Farnham Avenue school, aiming to provide 13–17-year-olds with skills to be creative within a digital music environment.

“Word travels fast with something like this,” Kralik said. “Everyone knows someone who wants to learn how to produce.”

“A lot of people told me they wished they had the opportunity to do this when they were younger,” added Argyropoulos. “A lot of the people that I know from the industry are really excited to get on board and teach the next generation who are interested in electronic music, and they can learn from the golden years that they experienced in the industry.”

One man, many electronic styles

November 8, 2011 Town Crier staff Comments Off on One man, many electronic styles