School being almost out for summer doesn’t necessarily mean it’s time to put down the books.

Anna Fitzpatrick, of Mabel’s Fables bookstore on Mt. Pleasant Road, and Serah-Marie McMahon, of Type Books in Forest Hill Village, say you can capture kids’ attention by picking charming books with great illustrations and an outdoorsy or summer theme.

For young adults they recommend smartly-written and engaging thrillers.

“Those are the types of things that are fun to read in the summer — things that will hold your attention but not require too much mental energy,” Fitzpatrick said.

Camp Rex, by Molly Idle
From the author behind last year’s Tea-Rex, a how-to guide for throwing a tea party for a dinosaur, comes the new release, Camp Rex.

“This one is about tips on how to go camping with a bunch of dinosaurs,” Fitzpatrick said. “I like that it’s a dinosaur book that features girls, because a lot of them tend to be boyish, (and) they’re really adorable illustrations.”

Jim Curious: A Voyage to the Heart of the Sea, by Matthias Picard
“This is a wordless story book that follows the underwater adventures of a chubby aquanaut, complete with lovely large-scale
illustrations to be viewed through provided 3D glasses,” said McMahon, Type Books’ community manager and kids’ book expert.

Naked!, by Michael Ian Black, illustrated by Debbie Ridpath Ohi
Comedian Michael Ian Black, who has appeared in films like Wet Hot American Summer and TV shows like Ed, is the author of Naked!, the story of a boy who doesn’t want to get dressed — until he realizes that capes count as clothes.

“The illustrator Debbie Ridpath Ohi is from Toronto,” Fitzpatrick noted. “It’s another fun, cute one.”

“It’s about two dogs, Buddy and Zoro, who are kind of friends but they drive each other crazy,” Fitzpatrick said. “Bud gets fleas and he has to wear a cone, so it’s about their relationship.”

Peggy: A Brave Chicken on a Big Adventure, by Anna Walker
The book features water-colour illustrations that incorporate photographs within the imagery.

“It’s about a chicken that has her routine: she does the same thing every day,” Fitzpatrick said. “Every day she has her breakfast, she plays in the yard and watches the pigeons. Then one day she gets swept up in the wind and ends up in the city.”

Tom Gates: Absolutely Fantastic (at Some Things), by Liz Pichon
This is part of a series of books featuring main character Tom Gates.

“Tom goes on the field trip to end all field trips in this newest addition to the hilarious British series of nearly-graphic novels in the vein of Diary of a Wimpy Kid,” McMahon said.

“This is the kids’ version of it and it takes place in Barcelona,” Fitzpatrick said. “She’s out solving mysteries.”

Lord and Lady Bunny: Almost Royalty!, translated from The Rabbit by Polly Horvath, illustrated by Sophie Blackall
The sequel to Mr. and Mrs. Bunny — Detectives Extraordinaire! by National Book Award-winning author Polly Horvath, which promises to be just as funny.

“It’s a strange story about a pair of rabbits determined to become royalty, charmingly full of puns and witty, twisty sentences sure to produce the giggles,” McMahon said.

Poached, by Stuart Gibbs
This funny mystery is about a boy named Teddy living in a big zoo and amusement park.

“He runs wild and is left to his own devices and plays a lot of pranks,” Fitzpatrick said. “One day one of the koalas goes missing and he’s the prime suspect.

“He knows he didn’t do it, so he’s trying to solve the mystery himself.”

There Will Be Bears, by Ryan Gebhart
There Will Be Bears is the story of a young boy named Tyson who plans to go hunting for the first time with his grandpa Gene, who gets sick and is put into an assisted-living home.

“He feels like he won’t be a man until he goes on this hunting trip,” Fitzpatrick said. “The trip is called off and Tyson is crushed, so they end up making a plan to sneak out and go on this camping trip together. It’s really heart warming.”

“Firecracker is a Rushmore-like story of Astrid Krieger after being kicked out of too many boarding schools,” McMahon said. “She finally finds her place in at the local public high school.”

Since You’ve Been Gone, by Morgan Matson
After Emily’s best friend Sloane disappears without a trace, she gets in the mail a bucket list of things to do — including kiss a stranger and dance until dawn — before the summer ends.

“She decides if she follows it all she might figure out what happened to her best friend,” Fitzpatrick said. “As she goes through them all she learns a lot about herself and has adventures and stories to tell.

“It’s a really sweet book about affection and growing up.”

This One Summer, by Mariko and Jillian Tamaki
This graphic novel is about two girls who have visited Awago Beach every year since they were young. This particular summer they spend a lot of time spying on a teenager who works at the local corner store.

“It’s a young adults novel because there is reference to sex and drugs going on and they don’t even understand it and they can’t really make sense of it,” Fitzpatrick said. “But it’s a really beautifully done book about these girls who are really impatient to grow up.”

We Were Liars, by Emily Lockhart
Narrated by a rich, beautiful, privileged and spoiled teenager who is found in the water, with no idea of what’s happened.

“Nobody really tells her what is going on,” Fitzpatrick said. “So it’s very cryptic and it’s like a mystery, but it reads very ethereal.

“It’s one that you don’t want to share too much about the plot because it really reveals itself.” 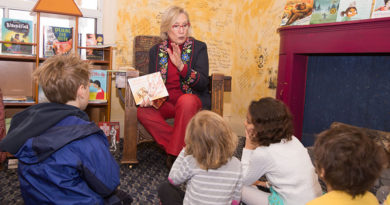 These cats are purrfect business partners

September 12, 2015 Brian Baker Comments Off on These cats are purrfect business partners