Gabe Sapienza is three letters away from being Hellboy’s psychic sidekick.

The Deer Park illustrator sits tucked in the corner at Nine Bars cafe laughing at my question, “Do you often get mistaken for Abe Sapien, or is it a nom de plume?”

He assures me it’s his real name.

“I get that a lot from Hellboy fans,” he says, with a laugh.

The easy-going 28-year-old slides into why he calls Nine Bars his home base and where the roots of fantasy art came from. I ran into him a few weeks ago at the very same place and decided to get his story.

He credits Canadian Todd McFarlane and Disney as major influencers, and he coos when talking about fantasy pencilers like David Palumbo, Tyler Jacobson, Cynthia Sheppard and Wes Burt.

But the real nugget is Sapienza’s ambivalence to horror.

There’s a nervous laughter behind a childhood story that he shares with me.

“I was traumatized as a child by a skeleton costume. It came to the door and I got so stressed out that I got a fever,” he admits.

From then on, he started drawing skulls and got edgier with his movie selection.

“There’s a weird duality of it,” he adds. “I was incredibly afraid of the horror genre but I was also very strangely attracted to it.”

As for coffee, well, the cafe’s owner Laith Toukan has a similar philosophy about java as Sapienza has about art.

That’s probably why Toukan asked him to post some of his artwork on the walls of the shop.

You’re probably wondering what’s so special about Sapienza. Well, he’s just been welcomed aboard as a renter at R.A.I.D. Studio. I’ve mentioned them before: they’re kind of a big deal in Toronto’s — no, the world’s — comic book scene.

Helmed by Ramon Perez, it features some of the industry’s biggest talents who draw for DC and Marvel.

And here, I get to sit down with a young Simba, being shown the ropes by Perez, the acting Mufasa in this instance.

How Sapienza came to meet with Raid was through his former art director, Lyndsey Gallant, at XMG Studios, a small mobile game developer here in the city. Her colleague Nimit Malavia, who is an artist at Raid, put his name forward, and voila, he starts at the studio as a young cub in April.

“I’m just excited to be in that environment,” Sapienza admits. “It’s going to allow me to participate in things like FanExpo under the umbrella of Raid Studios.”

In the mean time, he’ll work away at his project, Scare Tales. It’s a comic book he co-authors with friend Kyle James Smith. He’s channeling his old childhood fears on this one, and it makes him giddy.

“What makes a lot of horror stories scary is there’s usually something very relatable at the core, something fundamentally human,” he says. “A lot of our vulnerabilities come out in horror movies.

“I find it’s a vessel for me to tackle my own fears or own hurdles.”

I wish nothing but success for him. And for midtowners, take a look at his work at Nine Bars. It’s a great opportunity to grab some prints from a budding young artist. 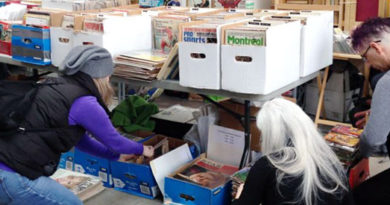