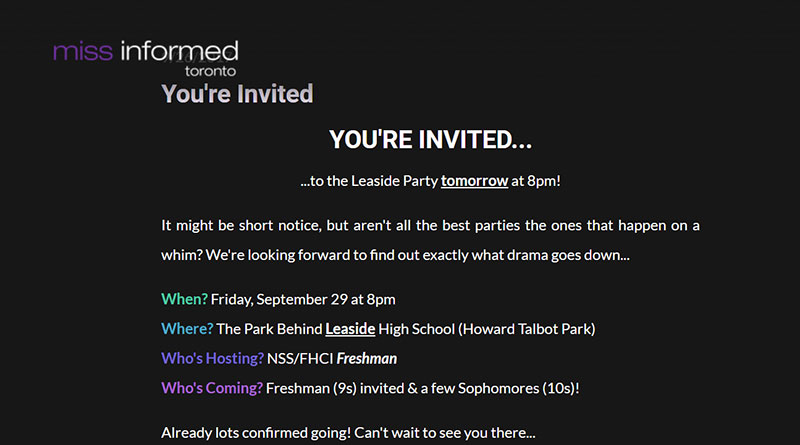 However, it’s not something I think Blake Lively or Leighton Meester (of the TV adaptation) would titter at, given that at least some of the parties advertised on the site, misinformed.xyz, have led to swarmings, robberies and stabbings.Now, I typically cast my pop culture column in a positive light and fit midtown Toronto into that contextual frame. But not every aspect of the de rigueur is uplifting.

Parents on Facebook pages like Davisville Moms and members of the Leaside community have been talking about the rise of teen parties. In particular, one planned for Talbot Park on Sept. 29.

Nothing to the level of the Rosedale affair, where multiple kids were reportedly robbed and assaulted at a party at Rosedale Park. Some accounts of that event, as mentioned on the CBC website, had residents noting passed out kids on the streets. It was a scene out of Toronto’s Entertainment District.

I had the displeasure of wading through the mire of Miss Informed’s point-form exposés and found it alarming that a site would name students from Leaside, North Toronto, Northern, Rosedale Heights and Forest Hill. First names only, but with reference to the high schools they attend. Sometimes, that’s more than enough.

Miss Informed may be a poorly chosen moniker, given the rise in fake news, and a certain politician’s proclivity to point out pourported falsehoods in reporting. Perhaps the veracity of the website should be questioned, if not shut down.

In an effort to find out more from parents, I direct-messaged one member of the Davisville Moms Facebook group. She refrained from going on record, out of concern for her daughter, but there is a groundswell among parents.

A few Leasiders shared their conversations with me, but much like the Davisville wall, they were reticent to go on record.

The wording from the narrator of the TV show, Gossip Girl’, is similar to Miss Informed’s bizarre porthole to the ocean of teen angst: “Who am I? Well, I’m one of you, but I’m also only your new favorite source for the latest gossip on the social scene at the Midtown Toronto high schools, as well as its parties, gossip, stories, and finally, its hottest couples and people.”

Somebody clearly watched the show.

There are warnings on the site from other people posting in the call-and-answer blog. One individual, Mojo, posted, “This is a fraud!! DO NOT GO!!! Getto [sic] kids are planning on robbing and beating anyone who shows.”

Other comments smack of parents feeling the need to digitally reprimand the posters, which is most certainly warranted.

I have yet to hear from the investigating officer at 53 Division, but it’s a topic that needs to be watched.

In order to assuage parental fears, the Toronto District School Board released a statement admitting that they are aware of the website. Still, they cannot control what exists outside of its boundaries: the school.

“It’s important to note that content posted online that has a negative impact on the climate of a school can result in possible disciplinary action in cases where the poster’s identity is known,” TDSB spokesperson, Ryan Bird said in an email. “In this specific case, the identity of the poster is not known by staff.

“We would encourage anyone that has concerns about the content to contact the site administrator to make them aware and should they be experiencing any difficulties as a result of posts, to speak with staff at their schools such as a teacher, guidance counsellor or Principal.”

This, of course, addresses the biggest concern I have, the descent into online bullying. And we don’t need that kind of hate.

Who to call to put on a party