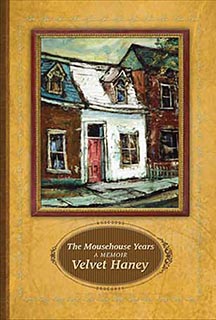 I’ve been struggling with the idea of graphic novels. It’s obvious that one way to resist the declining popularity of books is to present printed literature in a manner more accessible to today’s shortened attention spans. But really, most graphics novels — aka comic books — are so bad. Simplistic, sensationalistic, often overly violent.

But Velvet Haney may have found the solution.

She writes, in the promotional material for her novel The Mousehouse Years, that when she started writing her memoir she found the result flat and one-dimensional. Emulating another writer of family dramas, she decided to go the graphic route. Despite not having the seemingly requisite drawing skills, she found her efforts made the story come to life.

The “Mousehouse” of the story is a tiny rowhouse in Toronto’s impoverished Alexandra Park neighbourhood, where the author’s mother raised six kids in the 1950s and 1960s, before the area was razed to make way for the low-income housing development that still sits there.

With childlike but affecting drawings, old photos, newspaper clippings, her mother’s diary entries and other odd bits of text and graphics, Haney tells the story of how they came to live there. 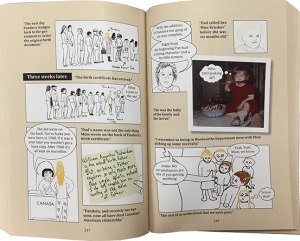 It’s really her late mother’s story, for the most part. Born into a well-to-do family in Moore Park, Meg McLaughlin eventually fell for a charming, philandering speculator who entered and left her life repeatedly, usually sticking around only long enough to get her pregnant. After several moves, she and her kids ended up in inner-city poverty while her sometimes husband jetted around the world and lived the high life in affluent parts of Toronto with a string of women he used and abused.

Speaking of abuse, the novel also delves into some disturbing behaviour the man got up to with the kids during his visits and hints strongly at worse, which the author can’t bring herself to detail. Despite the light, even humorous, writing and the generally fun style of the whole book, this is quite a dark story in parts.

But it’s all compelling reading. The graphic memoir can be read in its entirety in less than a couple of hours, but it is likely to stay with you much longer than that. Haney is sure to be pressured to write a sequel as readers will want to know more about the characters, their story in this work being curtailed rather abruptly after their time in the Mousehouse.

Should we even be calling this “reading”? Perhaps we need a different word to describe how we take in and experience this new hybrid art form. Viewing? Experiencing?

Whatever we call it, The Mousehouse Years is quite an accomplishment. It never aspires to great literature, nor does it thrill like the most popular literature of the day. But it does find a new way to tell an ordinary story about ordinary people so that their extraordinariness is brought out. The book appeals like some amateurish, rough-and-ready creation giving an unvarnished look into some local lives, but it’s taken much art and craftsmanship to create this pleasing illusion.

I’m also sure some other Toronto writers exposed to this book will reconsider their own writing styles and think, “Hey, I could do this.” They might. But Haney did it first.