One part of pop culture many people forget about is professional sports.

After all, it’s a form of entertainment that requires great skill, and often, because it’s not arty, it’s not grouped in with comic books, movies and supermodels.

For Canadians, all things hockey are part of the cultural fabric. Being a hockey fan is a rite of passage.

I grew up in Whitby, a self-declared hockeytown, and remember in my freshman year of high school seeing then-senior Wayne Primeau walking around Anderson Collegiate sporting an Owen Sound Platers jacket. He went on to an NHL career.

Whitby was also home to Joe Nieuwendyk, Gary Roberts, Adam Foote, John Tavares and Eric Lindros, all of whom starred in the NHL.

But what of midtown Toronto? What hockey secrets does it hold?

Well, in my travels for the Town Crier I’ve learned that Nick Kypreos and family call Leaside home. St. Michael’s College School is a hotbed for hockey talent and its athletics director, Chris DePiero, is a part-time scout for Pittsburgh Penguins. He also coached Tavares while the superstar played for Oshawa Generals. And one of the Toronto Maple Leafs’ icons, Darryl Sittler, has called Bedford Park home since 2002.

I recently had the privilege of talking hockey with Sittler. I asked him about playing against guys like Mike Bossy, Bob Nystrom, Bill Barber, Larry Robinson, Serge Savard, Grant Mulvey and Terry Ruskowski. I think he raised an eyebrow when I also mentioned Pierre Mondou in our discussion.

Sittler works for the MLSE Foundation alongside another Leafs’ alum, Wendel Clark. They raise awareness and money to refurbish hockey rinks so kids across the city and GTA can play in great facilities.

Some kids — even those born two decades after he retired — call Sittler their favourite player. He told me he believes it’s because of a bedtime story, My Leafs Sweater, that was first published in the early ’90s and is being passed down from grandparents to parents to children.

“I’ve had kids who have read the story and know me as a player. I’ve had some kids who are 5 or 6, and when asked who’s their favourite player, they say Darryl Sittler.”

Sittler retired as a Detroit Red Wing in 1985, but his heart belongs to Toronto.

When it comes to current stars, take a trip to St. Michael’s Arena. On the wall are photos of the hundreds of players who have passed through the doors. Current NHL standouts Andrew Cogliano, Jason Spezza and Tyler Seguin are in the wonderful mix of generations that are remembered in banners and photos. Frank Mahovlich, Ted Lindsey and Tim Horton also owe their careers to St. Mike’s Majors.

Which goes to show, no matter how much Toronto changes — culturally or demographically — it still has hockey roots. And you can’t take that away from Leafs Nation, or any other hockey fans who call midtown home. 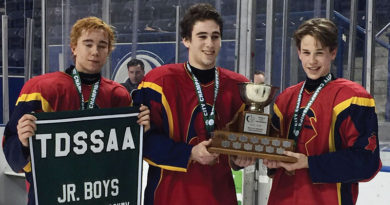