The Summoned, by Fabrizio Filippo, directed by Richard Rose, running at Tarragon Theatre’s Mainspace to May 29.

If you want to see The Summoned, you probably shouldn’t read this review. It’s the sort of play that works best if you walk in knowing nothing — especially the main plot twist, which I spoil below — because without its secrets, what little value this story has vanishes.

The summary provided by Tarragon certainly sounds intriguing: “Following the death of a billionaire tech visionary, the most important people in his life are summoned to an airport hotel for the reading of his will.” Though many great plays could be spun from that setup, The Summoned is not one of them.

Here’s how that setup plays out: upon his passing, reclusive visionary Khan (voice of Alon Nashman) summons five people to the reading of his will: Aldous (playwright Fabrizio Filippio); Aldous’s mother and Khan’s former flame Annie (Maggie Huluchak), whom he once left a message for every day for a year even after she filed a restraining order against him; legal expert Laura (Kelli Fox); Gary (John Bourgeois), the roundly disliked president of Khan’s company; and Isla (Rachel Cairns), Aldous’s off-again, on-again girlfriend.

The reading of the will is carried out by the eccentric Quentin (Tony Nappo), who is given his orders through a walkie-talkie (Nashman again) and explains the bare minimum while following them, partly because he enjoys antagonizing the summoned while randomly spraying air freshener in their faces, and partly because he doesn’t know more himself.

If I liked The Summoned, this is where I would discuss the parts that worked, but I didn’t, and the reasons why all involve plot twists, so you’ve been warned.

Let’s start with Laura and Gary, since their secrets are the type you might have expected after reading the summary: at one point, for no apparent reason Laura breaks down laughing and reveals she carried on an affair with Khan while dating Annie, despite the fact she doesn’t find it funny and doesn’t know why she said anything. Gary, meanwhile, is equally confused by his actions when he breaks down crying and admits that he wanted Khan — whom he didn’t see in person for nine years despite chatting with him every day — to love him.

Why do Laura and Gary reveal these secrets, you may ask? Nanobots — the “air freshener” sprayed by Quentin — apparently burrowed into their brains and rewired their thinking.

It gets better: early on it’s hinted that the awkward, somewhat reclusive Aldous is Khan’s son, and indeed Filippio plays Khan during sudden, mid-scene flashbacks in which Cairns suddenly plays a young Annie — but he isn’t. He isn’t even Annie’s son, apparently. It turns out “Aldous” is an organic device programmed by Khan and grown in Annie’s womb (without her knowledge) to act as a new body for Khan, whose consciousness was uploaded to a computer.

There’s a long scene where Khan’s consciousness, rendered as sperm-shaped light on a screen, chats with Aldous, and it ends with Aldous volunteering to transfer his personality into a computer while Khan possesses his body — because Khan, you see, isn’t trying to save himself, but Annie, whom he’s been monitoring 24/7 and who is conveniently dying. Fortunately, Annie has an organic device of her own ready for her: Isla, who is more than happy to transfer her consciousness to a computer while another person inhabits her body.

So accepting, for argument’s sake, the presence of nanobots and self-sacrificing organic devices, what we have here is the story of a creepy billionaire doing everything in his power to save a woman he’s infatuated with so she’ll finally kiss him, despite the fact that she wants nothing to do with him.

I think Annie might even accept Khan’s offer. I’m not sure. The show comes to a very abrupt end, without properly exploring any of its themes.

Part of me was annoyed the play finished as quickly as it did. The other part was thrilled, because it meant The Summoned was over and I could finally go home.

Actor is a rare find 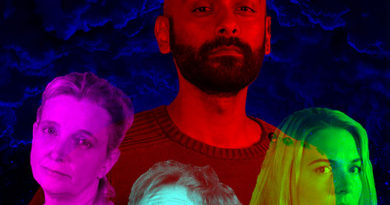