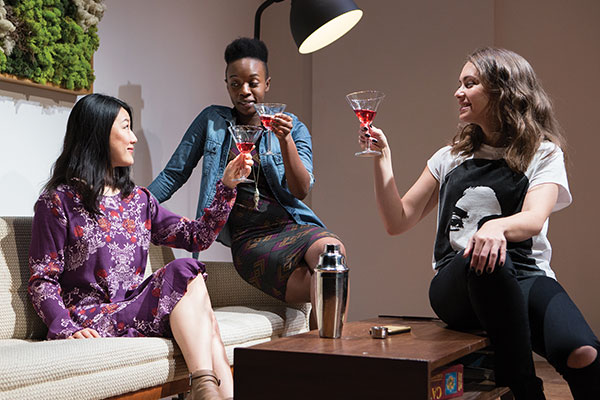 I’m one of about eight millennials in my day job’s 40-person office (assuming one defines the term “millennial” as someone born in 1982 or later). While my younger coworkers and I aren’t above joking about the cultural divide between us and our (older) employers, more often than not the underlying question isn’t “Boomers, amirite?” It’s “Why do they treat us like a different species?”

I found myself asking the same question while watching The Millennial Malcontent.

Every reductive stereotype about my generation is embodied by at least one of the eight characters in playwright Erin Shields’ caustic, 130-minute reworking of The Provoked Wife, an Elizabethan-era comedy I won’t pretend to be familiar with.

Moxy (Liz Peterson), the titular malcontent, has enough self-awareness to realize she’s restless because her year-old marriage doesn’t match her fairy tale dreams. But she remains too lazy to do anything about it, except sabotage her relationship with drunken nights out. (Millennials, amirite?)

She’s married to Johnny (Reza Sholeri), a terrific cook with a prestigious internship at a high-profile NGO. He takes pride in being emotionally open with friends, faithful to his wife. He can’t understand why she would be less than thrilled to be married to someone who loves nothing more than talking about his feelings all the time.

So Johnny’s best friend, Heartfree (James Daly) is a vinyl-loving, podcast-hosting hipster as comfortable being physically affectionate with Johnny as he is being courted by perpetual graduate student Teasel (Natasha Mumba). He suggests Johnny cheat on Moxy with Faith (Rong Fu), a “monogamish” vegan who pours all of her time into either pursuing him with baked goods or nurturing her unfortunately-named healthy living startup, Kneading, Knitting, and Kneeling (KKK).

Two roadblocks stand in the way of Johnny and Faith and Heartfree and Teasel becoming the happy couples we know they could be: Moxy, and narcissistic video blogger Charm (Frank Cox-O’Connell), who finds himself smitten by Teasel when the four-time master’s student chides him for being the empty vessel he knows himself to be, a relentless performance artist who turns on his “sincerity” only for the camera.

O’Connell’s performance is really something else. Whether Charm is standing tall in his underwear, using the most overwrought prose imaginable to lament how deeply the other characters have cut him, or gloating over how perfectly the various disguises he uses to break them up (including a handyman and part of a “living wall”) hides him, every line is pitched to the rafters — except for his brooding “confessionals,” which are dutifully recorded by his doting French Canadian cousin Mimi (Amelia Sargisson) and projected onstage.

Also part of the mix is Moxy’s friend Raz (Alicia Richardson), a computer programmer and slam poet who happens to be a lesbian.

For all that, I have to concede that The Millennial Malcontent is entertaining — it certainly made the audience laugh, and received a substantial standing ovation.

I just wish I hadn’t heard so many older viewers discussing how accurately it presented millennials afterward. This play captures my generation about as well as Archie comics depicted our years at high school.

The art of storytelling