When I first saw the cover of John Moss’s latest work, I thought he must be getting on the bandwagon of recent best-selling thrillers with similar titles (The Girl on a Train, Gone Girl, The Girl Who Played With the Hornet’s Tattoo, whatever).

But it turned out The Girl in a Coma is actually a mystery novel for adolescents, probably female.

I’d known Moss as the author of a terrific series of mysteries for adults, featuring the Toronto detective duo of Quin and Morgan. This change was not promising. 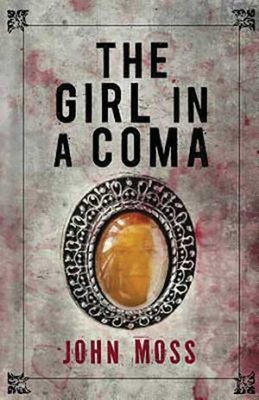 But he had me at the first lines:

“Imagine you can’t move. You can feel yourself being touched but you can’t tell where. You think you are lying down but you can’t be sure. You can see nothing, taste nothing, smell nothing, but you remember what it was like to do those things. It’s like being dead but you’re not dead.”

Really, you can’t leave it there — you have to read yourself out of this horror.

And there is hope. Fifteen-year-old Allison Briscoe struggles to bring herself back to the land of the living, so to speak.

But can she do it before she solves the twin mysteries of whose attempt to kill her put her in this situation, and of who is killing other hospital patients and will surely get to her soon? Even if she can think her way to solutions, how can she tell anyone? She can hear but she cannot communicate.

To complicate matters further, this mental struggle takes up only half her time in the coma. The other half of the time she is dreaming, reliving the lives of her feminine ancestors through some kind of racial memory, which is never explained. She’s a lapsed Mennonite who joins George Washington’s army during the American War of Independence, she’s a United Empire Loyalist when the Americans attack Canada in the War of 1812, she’s an imprisoned rebel after the 1837 Rebellion…. And in every life she has to right some kind of wrong. Mysteries within mysteries.

It’s quite involving. The language is somewhat simplified for the younger readers but never  feels condescending. I’m not sure the vocabulary in this novel is any less than that found in many a classic work of our great literary minimalists.

At times, though, it seems the mysteries are wrapped too quickly. The characters, especially those in Alison’s head, are nuanced and often fool us, but sometimes after many complications their lives are suddenly sorted out too easily to be completely believable. This may be a function of having to fit so many branching stories into a single novel.

Small price to pay, perhaps to get this much narrative in a story that takes place almost entirely in the mind of a comatose, bed-ridden teenager.

It’s brave of Moss, a former academic now in his mid-70s, to even attempt this radically different kind of story and impressive that he pulls it off so assuredly.