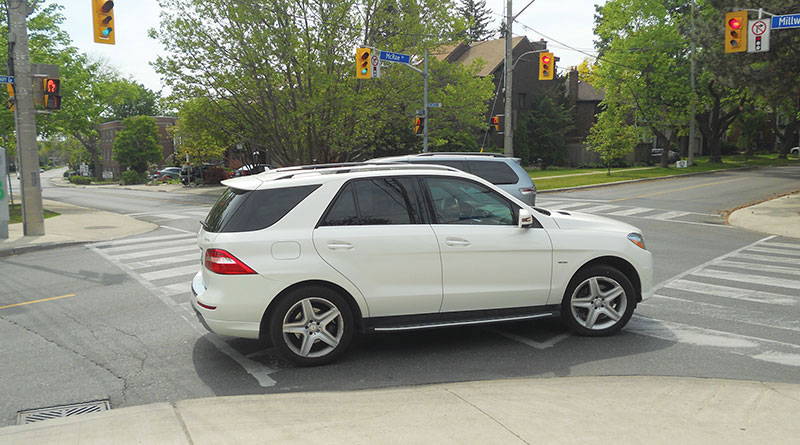 In a bygone era, drivers used to stop at stop signs. Now, practically nobody comes to a full halt — except when other vehicles are in the way.

I can recall speculating upon moving to Leaside 17 years ago that eventually some kid in the neighbourhood was going to get run over by a non-stopping driver.

The Millwood Road and McRae Drive intersection has become notorious as the scene of the accident that took the life of young Georgia Walsh last year.

Then-councillor John Parker and city council quickly arranged that a pair of “no right turn on red” signs be installed. One is at the white stopping line at pedestrian eye-level and the other is next to the traffic light, both facing southbound drivers on McRae. (In fact, right turns on a red are now prohibited from all four directions). So, to be clear, any right turn on a red from McRae southbound onto Millwood is illegal. A heavy fine awaits flouters. And for good reason.

I wondered though whether drivers have been taking it seriously. As I took notebook in hand and planted my derriere on a tree stump on the United Church lawn to unobtrusively observe the intersection, I pondered that I was wasting my time. Surely everyone would stop. It was 3:10 p.m. on May 23, a Saturday, a perfect spring day, with Bessborough Public School’s May Day just winding up a few blocks away. There was simply nothing to put drivers on edge as with weekday rush-hour traffic.

The white stop-line is one and a half car lengths before the crosswalk. To stop there, or drive right through it to the very corner, and then make an illegal right turn is a maneuver that takes several seconds of driving to execute. With people around in cars or walking about, you can’t break the law here in a subtle way. It’s flagrant. In fact, drivers would be breaking two laws: failing to stop behind the white line, and making the right-turn on a red light.

I doubted drivers would dare to be doubly demonic at the courner where tragedy had struck just a year ago.

Hundreds of vehicles went by during the next hour and a half. I was interested only in the ones with the opportunity to make that illegal right turn. I decided I’d persist until 30 vehicles had made the right turn, legally by waiting for the green light, or illegally by turning on the red.

Results: an extraordinary 30 percent ignored the white stop line and turned right on the red. I include two cars that desperately tried to turn right but couldn’t due to heavy traffic or crosswalk activity.

Of the nine illicit right-turners, seven appeared to be male. No surprise there. I have to admit, my objectivity failed me a few times and I followed offending cars around the curve, gesticulating my indignation.

I say bring on the cameras at stop signs and install them at traffic light intersections too, especially fatality-marred ones like McRae and Millwood, on a random rotating basis. Otherwise the epidemic of rolling stops (and illegal right turns) will continue.

We Leasiders were thoroughly shaken by the Georgia Walsh tragedy. Let’s not sit back and let it happen again. 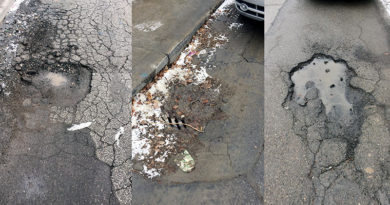 Fear the day cracks join up to make block-long pothole