Andrew Street is one of the few remaining landmarks pointing to the origins of Toronto’s Kensington Market, then known as The Ward. In the early 1900s this was the Jewish part of town, and as many as 50,000 Jews worshipped at more than 30 synagogues in this small area.

Over time, they moved to more affluent areas of the city, and successive waves of immigration brought new ethnic communities — Portuguese, Italian, Vietnamese, Caribbean — to Toronto. They too settled in The Ward, bringing their own cultural influences with them.

Through it all, what began as the Jewish Market thrived, and Torontonians came here summer and winter to buy fruit and vegetables, and fresh chicken.

The chicken didn’t come any fresher: their necks were wrung on the spot!

True to its multinational history, Kensington Market remains a melting pot of cultural and ethnic communities.

The fresh chickens are gone, but restaurants serving Mexican, Middle Eastern, Chinese, Japanese, Jamaican and many other cuisines rub shoulders with fresh fruit stalls, cheese and fish markets and even one of Toronto’s most famous men’s clothing stores — Tom’s.

I’m sitting in Ding Dong Pastries on Spadina Avenue, about to sample a Chinese egg tart. It’s the first stop on my Tasty Tour of Kensington Market. Our guides, Audrey and Ally, describe the origins of this sweet.

A fusion of the classic Portuguese and English custard tarts, it was developed by Hong Kong tea houses to compete with dim sum. Ironically, it has become a staple on dim sum menus. To me, it tastes like the comfortable custards of my youth, set into a pastry shell.

Spadina is theoretically part of Chinatown, but Audrey explains that she wants us to sample this culture too. By dint of simply crossing the street, we move into Kensington Market proper, and the ambience and ethnic mix instantly change.

Outside our next stop, The Chocolate Addict, a young man, complete with dreadlocks, plays a large drum to entertain passersby.

For a moment I think we could be in Jamaica, except that he’s bundled up against the Canadian cold!

Truffles, chocolate-covered ginger and even hot chocolate made with the real thing make The Chocolate Addict a Mecca for chocoholics. It’s the only chocolate shop in Kensington.

From truffle flavours like wasabi, pumpkin, chili and more, I discover that my choice — caramel and sea salt — is the favourite of women. How disappointing to be so mundane! But I love the way the salt bursts on my tongue, adding its flavour to the bitter chocolate and sweet caramel.

Men’s favourite is chili, explains Jeremy, who makes all the chocolate himself. Need I point out that men buy the most fiery salsas and insist on challenging one another to determine who is most asbestos-tongued?

At our next stop, we meet Hayam; she and her Lebanese husband have been selling authentic Middle Eastern food in this market for 18 years. (Picture cases filled with halvah, baklavas, shortbreads and gorgeous nougat.) I try a miniature rolled baklava of pine nuts.

It isn’t as syrupy or as sweet as some versions, but the delicate layers of pastry and nuts make a perfect foil to a cup of strong, bitter coffee.

We head to nearby Pancho’s. (Can there be a more Mexican name than Pancho’s for the only bakery in the city making authentic Mexican bread and pastry?)

The story is that when Adalberto arrived in Toronto, he missed the breads and pastries of home so much that within 18 months he had opened his own bakery.

His family has been running bakeries in Mexico since 1927, so he had lots of experience on which to draw.

At Pancho’s, we try a churro, whose origins, explains Ally, are Spanish.

The baker squeezes a dollop of filling — strawberry, chocolate, or my choice, dulce de leche — into the baked dough stick. This isn’t your greasy fairground churro. It’s crisp outside and soft inside, sprinkled with lots of sugar. I plan to return later to try one of the empanadas or arepas. It all looks so enticing.

Our final stop is Blue Banana. This shop has more than food. We found clothes, gifts, home decor, and plenty of chachkas.

Opened by a South African immigrant, it mirrors the kinds of stores one finds there: a collection of independent shops collected under one roof.

At one of these I sample Butter Baked Goods’ homemade marshmallows.

Light as a feather, these come in different flavours like raspberry, pistachio and vanilla. They’re unlike any marshmallow I’ve ever tried before — an airy, sweet treat.

There’s also a British shop in Blue Banana where we sample that most characteristic British sweet: a Cadbury chocolate flake.

I recall these topping an ice cream cone in England when I was a child.

As the tour ends, each of us makes a beeline for some of the shops we have noted in passing. We’re all a little full, tummies contently stuffed with sweets and heads buzzing with all the fascinating facts we have learned about them and about one of Toronto’s most unique and culturally rich neighbourhoods. 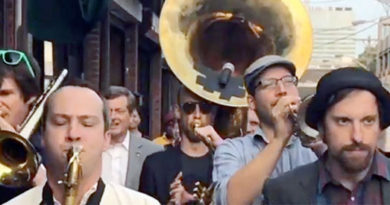 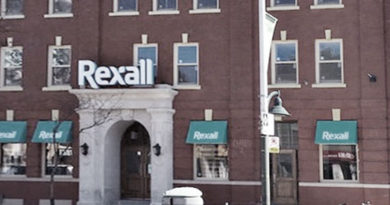