With a dozen surprisingly limber people stretching amid the lonely canes, walkers and empty motorized scooters scattered about the studio, it doesn’t take long to realize this class at Body Harmonics is not your typical workout.

Then again, pilates is not your typical exercise. The bright space at Body Harmonics’ Dupont and Christie Street location has no mirrors. Unlike some traditional exercises, pilates is not preoccupied with burning fat or building mass. Rather, it is more concerned with increasing flexibility and strength by concentrating on controlled, efficient movement, says studio owner Margot McKinnon.

Because controlled movement is the focal point of pilates, it can be especially helpful to those with Parkinson’s disease or multiple sclerosis, diseases that hinder mobility. McKinnon’s studio offers a variety of ‘neuro’ classes, which cater to people suffering from neurological disorders.

“(The Multiple Sclerosis Society of Canada) approached us because they had a couple of people that were coming here as actual participants,” McKinnon said. “They could see the applicability for the population and they liked our approach to movement and movement education. So we partnered with them and initially created the program that way.”

If you don’t use it, you lose it

Angelo Kostanas lives with multiple sclerosis and has been participating in the neuro classes for a couple of years. He says what he enjoys most is the time spent seeing others and keeping active.

“If you don’t use it, you lose it,” Kostanas said while sitting on his exercise mat. “By taking this class you get away from being stagnant. I know others that have diseases, they just lie there and do nothing and that eventually catches up to you and becomes worse for you.”

Penny Kennedy started at Body Harmonics as a client but is now the instructor for Kostanas’ class. She describes the group as boisterous, but says the health benefits extend beyond the opportunity to socialize. The workouts have such a positive effect on one participant in the class that afterwards she is typically able to walk without the aid of her cane for up to four hours.

McKinnon said she doesn’t teach the neuro class herself because she gets too emotional. Kennedy, the current instructor, says that although that was an issue at first, she now draws strength from being with the group.

“When I first started I would sometimes go home and have a good cry,” Kennedy said. “Now it’s really joyful for me because I see improvements and I see the positive effect I have on people’s lives.”

Body Harmonics has now completely taken over the neuro program and subsidizes the cost for participants. They also offer a ‘Starving Artist’ class at a significantly reduced rate that is geared to performers with physically demanding occupations.

McKinnon started Body Harmonics in 1996, and now has two locations. She has trained over 1,200 certified instructors from across the world. One of her trainees currently teaches pilates to the Cirque de Soleil troupe to help keep them in shape.

She estimates that 80 percent of her clients are female but she’s seeing more and more men starting to join as well as a handful of other demographics.

The attention paid to smaller, supporting muscle groups has attracted athletes worried about injury prevention and those going through injury rehabilitation have found pilates ideal due to its low-impact nature.

And while some may dismiss pilates as a fad, McKinnon is proud of her client retention rate.

“There’s lots of research that shows it’s great to have goals, but that is over focused on,” McKinnon said. “What makes people stick to anything … is it enjoyable, are they feeling good, are they feeling successful, is it fun?” 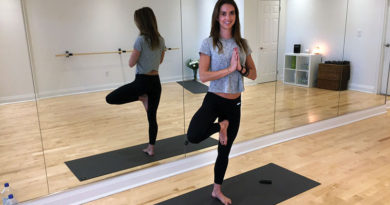