Where real life contradicts Shawn Star (“Look at it this way — this city sure is funny”, September) is at 31-57 Helendale. There had been trash strewn all about the lawns until the developer was told to clean it up. Then a little red tape was supposed to make it all better. This developer was told to make it all better. This developer should be told to bring these properties up to standard — at once — or forfeit any possible building permits in future. That, Mr. Star is what deters people from allowing properties to descend into slums.

Lifestyle advertising was banned for advertising of beer. When organized crime ran lotteries they called it the “numbers” racket. Today there are lifestyle ads for lotteries and telling the viewer to imagine how easy his life will be when he wins or how much fun they can have losing the rent money in 15 minutes. The backers of a Toronto casino try to sell us on the image of a James Bond-type at the roulette wheel with a blonde on each arm. But blondes don’t really go for a guy in a diaper who thinks he’s nursing a hot slot machine. If I were to have a casino shoved down my throat, it would be on the strict condition that poker, roulette, dice, blackjack are acceptable but there must be no slot machines. Not one. And the lifestyle advertising of OLGC should be the focus of attention of the CRTC. Simple morality, Mr. Star, extends well  beyond 150 metres.

There are homes on Helendale that will have 25-storey condos casting a direct shadow from the southeast. The condo developer will reap the profits while homeowners on Helendale will lose their natural light, and will likely have to pay higher electricity bills, if that is even possible in Kathleen Wynne’s Ontario.

We have left-wing councillors advocating for higher property taxes on working people to subsidize offshore speculation in our most essential commodity: housing. Am I the only one to see how wrong this is?

Now we are to pay a billion dollars for a park over the railway corridor when there is still open space available south of Fort York Boulevard and Dan Leckie Way. Oh? That land has been slotted for more condos? There’s the problem. Whoever it was that planned these neighbourhoods was supposed to make sure there were schools and open space. It is the people who made the profits here or who screwed up the planning who should be paying for Railway Deck Park. 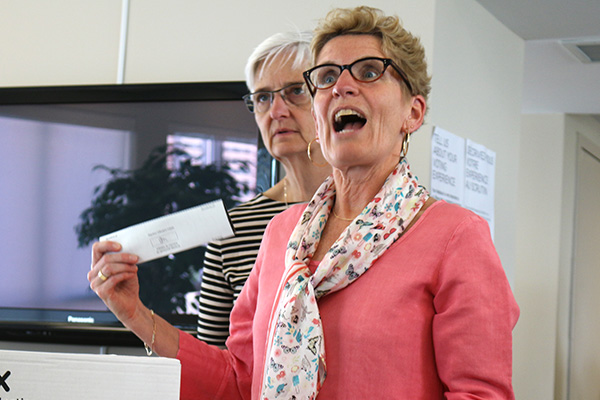 The Premier casts her vote